National recognition for work to end violence against women

Newcastle City Council and Your Homes Newcastle have been recognised for their work to end male violence against women and girls on White Ribbon Day. 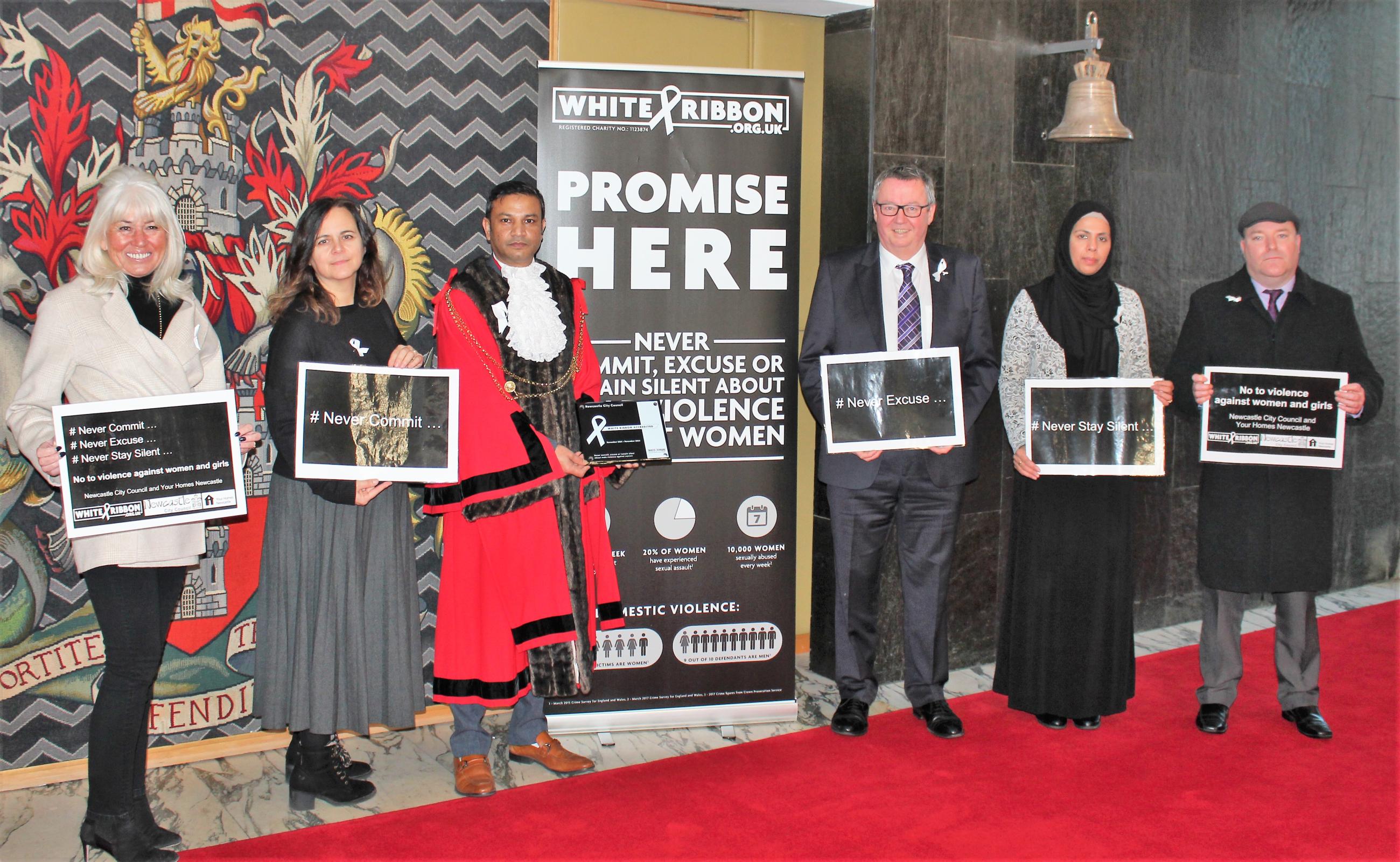 The organisations, who submitted a joint bid for White Ribbon Accreditation, were presented with the award by Peter Lassey, the Chair of White Ribbon UK, during a special presentation ceremony held in the Civic Centre.

White Ribbon UK are part of a global movement to end male violence against women and girls.  They do this by encouraging men and boys to take action to change the behaviour and culture that leads to violence and abuse.

To achieve accreditation the council and YHN have implemented an action plan that includes activities such as engaging and educating men and boys about their role in challenging violence against women and girls and promoting positive and respectful relationships between men and women.

Last year the council unanimously passed a motion supporting the White Ribbon Campaign and resolved to make White Ribbon Day part of the civic calendar, encourage councillors and staff to make the White Ribbon Promise and become Ambassadors and Champions and to work towards becoming a White Ribbon Accredited organisation. Soon after YHN decided to join forces with the council so that the two organisations could work together to tackle an issue that often still goes unreported.

The two organisations already have over 60 White Ribbon Ambassadors and Champions and many more staff and councillors have made the White Ribbon Promise to never commit, excuse or stay silent about male violence against women and girls.  But with 1 in 3 women experiencing domestic violence in their lifetime and over 80% being harassed in a public place they know there is more to do.

The council will also be marking White Ribbon Day by raising the flag outside the Civic Centre, lighting the building orange in support of the United Nations campaign to end gender-based violence and launching a 16 days of action campaign to raise awareness of the issue.

“All too often it is women who are wrongly told that they need to change if they don’t want to be abused, bullied or harassed but White Ribbon UK recognises that it is men and boys who need to take action to stop this unacceptable behaviour.

“We know not all men are abusive or violent, but we do all have a role to play in stopping gender-based violence which is why I made the White Ribbon Promise and became a White Ribbon Ambassador and why this accreditation is so important to us and to the residents we serve.

Anthea Sully, Chief Executive at White Ribbon UK said “We are so pleased to be able to award Newcastle City Council and Your Homes Newcastle accredited status.

“They recently hosted our first national event since the start of the pandemic, and we were really impressed with the work that they are doing to help end male violence against women and girls.  I look forward to working closely with both organisations in the future”

All too often it is women who are wrongly told that they need to change if they don’t want to be abused, bullied or harassed but White Ribbon UK recognises that it is men and boys who need to take action to stop this unacceptable behaviour.