CCTV infrastructure in Byker has been upgraded as part of a project to improve security and tackle crime in the ward. 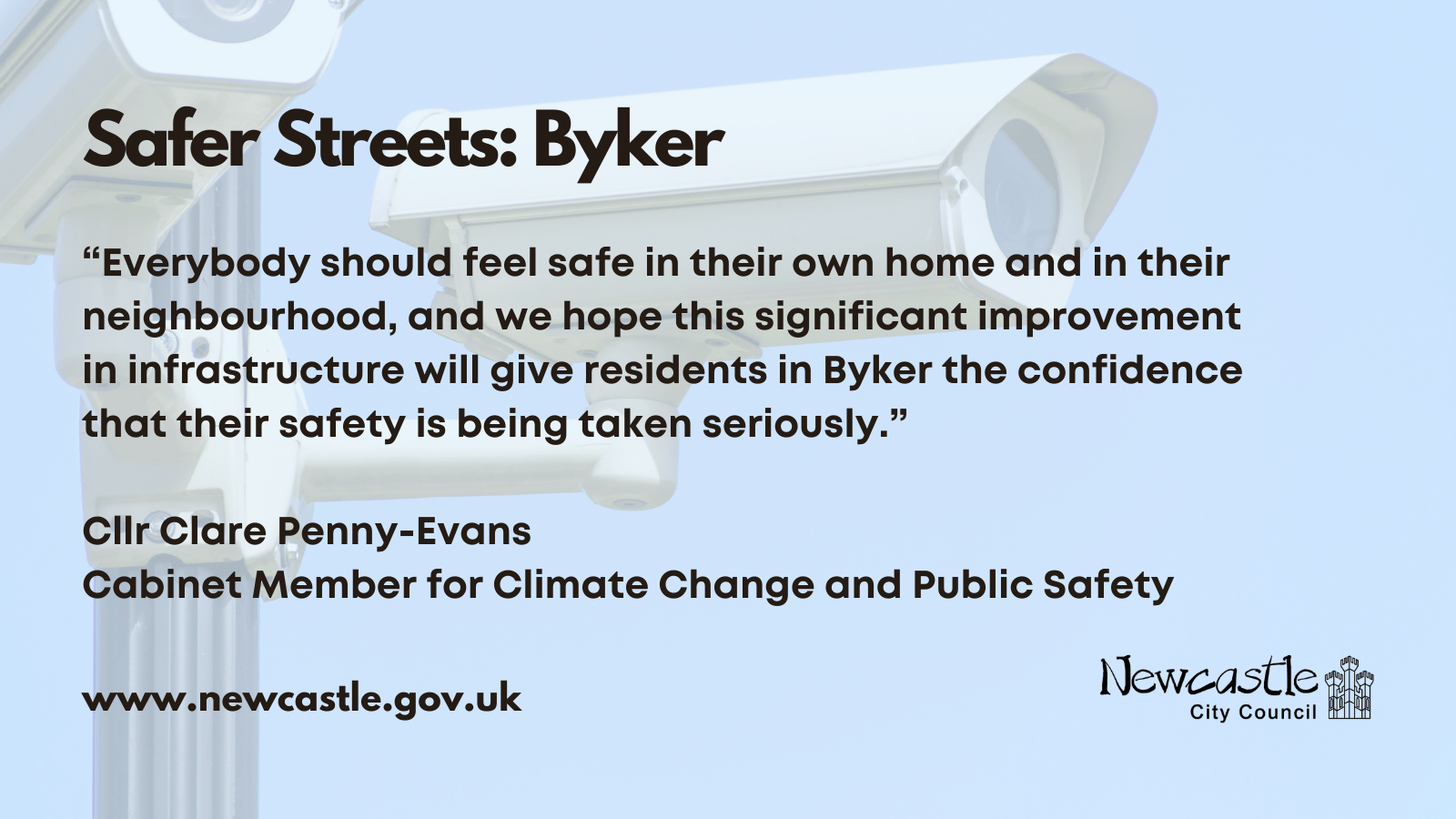 A number of new cameras are being rolled out into two zones of Byker, where partners in the city are working to improve the look and feel of the area and tackle crime and anti-social behaviour. Selected existing cameras are also being replaced with newer equipment.

This follows a successful bid from Newcastle City Council, Your Homes Newcastle, Northumbria Police and other partners to the Home Office’s Safer Streets Fund.

Cllr Clare Penny-Evans, Newcastle City Council cabinet member for Climate Change and Public Safety, and chair of the Safe Newcastle board, said: “Since the Safer Streets project began in Byker, we’ve worked closely with the local community to improve the look and feel of the area, and engaged with residents to find out about what issues most affect them.

“A significant element of Safer Streets is crime prevention and this is the next step on our journey to making a lasting difference in Byker.

“Everybody should feel safe in their own home and in their neighbourhood, and we hope this significant improvement in infrastructure will give residents in Byker the confidence that their safety is being taken seriously.”

Cllr Stephen Sheraton, on behalf of the Byker ward councillors, said: “This is welcome investment in the safety and security of our communities.

“Byker is a special part of Newcastle with an incredible community spirit and this additional CCTV coverage and monitoring should deter people from engaging in criminal activity or anti-social behaviour, and provide residents with that extra reassurance that they are safe to go about business.”

Kim McGuinness, Northumbria’s Police and Crime Commissioner, said: “This is a real boost for fighting crime in Byker. I hear it a lot – people tell me that with more CCTV they would feel that bit safer; and here we have it.

“These cameras can be a real deterrent for would-be criminals and those up to no good out on the streets. We have to use every tool in the box and technology can, and should, be playing a key role in modern policing. I know our police officers find these cameras are a powerful tool supporting operational activity that helps fight crime and keeps our communities safe. It’s welcome news for the people of Byker.”

The new CCTV cameras will be deployed at key strategic locations to offer best coverage across the areas covered by the Safer Street Fund project, and can be relocated if hotspot areas are identified by partners.

The cameras have the ability to read vehicle registrations at 200 metres and identify individuals at 100 meters. Footage from the cameras is sent through the control room at the Civic Centre, where security cameras across the city are monitored 24 hours a day.

The Home Office’s Safer Streets Fund first launched in 2020 with £25million made available to Police and Crime Commissioners across England and Wales.

The funding award for Newcastle came from a second round of Home Office funding. Newcastle has been awarded £431,967 through the fund.

Partners in the city, including the council, Your Homes Newcastle, and Northumbria Police, will work together throughout the duration of the project in Byker, which has been found to be disproportionately affected by burglaries and other crimes compared to other parts of the city.