"the Council" means the Council of the City of Newcastle upon Tyne.

2. These byelaws apply to the specified parts of the Haymarket, Newcastle upon Tyne designated in the Schedule to the byelaws and hereinafter referred to as the "designated areas".

3. No person shall skate, slide or ride on rollers, skateboards, wheels, mechanical contrivances or other equipment in a designated area.

4. The "designated areas" referred to in byelaw 3 and delineated by black hatching on the plan attached to these byelaws are as follows:

part of the land comprising the area to the north and west of the Haymarket Metro, Haymarket, Newcastle upon Tyne including the War Memorial and the fountains and bounded by Northumberland Street, St Mary's Place, Percy Street and the Haymarket.

5. Any person offending against byelaw 3 shall be liable on summary conviction to a fine not exceeding level 2 on the standard scale.

The Common Seal of the Council of the City of Newcastle upon Tyne was hereunto affixed this 21st day of October 2002 in the presence of:

Signed by authority of the Secretary of State 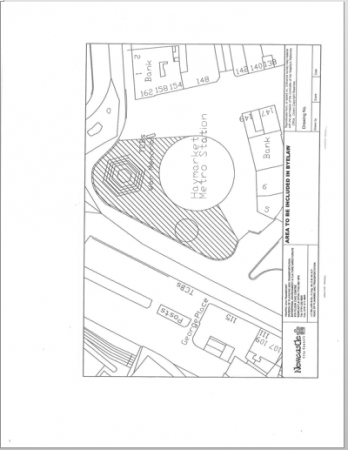