What is a fixed penalty notice?

A fixed penalty notice (FPN) is officially a notice of opportunity to pay a fixed penalty.  It is issued by an authorised council enforcement officer or by police to a person who the officer has reason to be believe has committed a criminal offence.

These notices may be issued on-the-spot or through the post.

The notice gives you the option to avoid prosecution. By paying the fixed penalty, the recipient discharges liability to a criminal conviction.

Can I appeal against a fixed penalty notice that I have been issued with?

There are no grounds of appeal against a fixed penalty notice being issued. You cannot appeal an officer’s decision to give you an opportunity to avoid prosecution. The officer has given you an invitation to effectively "buy off" your liability to prosecution.

By paying the fixed penalty, whilst not an admission of guilt, you agree that an offence has been committed and understand that by making the payment, no further action will be taken by the Council.

If you do not agree that you have committed the offence for which you have received a fixed penalty notice, and do not make payment, then the matter will be dealt with through prosecution in court.  It will then be up to the court, on receiving evidence, to determine whether or not an offence was committed and therefore whether or not any penalty should be imposed.

Effectively this means that an "appeal" can be made by challenging the allegation in court and exercising your right to be tried. If you are unsuccessful, a formal appeal against conviction and/or sentence can be made to a higher court.

What happens if I don't pay?

If payment of the fixed penalty is not made within the suspended enforcement period, the matter has to be referred to the HM Courts & Tribunals Service for prosecution.

You will receive a summons or written charge in the post.

Do I have to provide my details to the Council's officers?

Yes. For example, it is an offence under sections 88(8A) and (8B) of the Environmental Protection Act 1990 for a person to fail to give their name and address when required to do so by an authorised officer, or to give a false or inaccurate name or address. Similar provisions apply to many other fixed penalty offences.

The officer must establish the identity of the person they suspect of an offence and will seek to verify the information given.

A person who does not give their name and a satisfactory address for the purpose of serving a summons or charge is liable to arrest by a police officer.

The officers were in plain clothes - I didn't know or see them?

Authorised officers may patrol in uniform or in plain clothes.

If someone suggests that they would not have committed an offence if the officer had been in a uniform, then this would demonstrate guilty knowledge, awareness of the offence and of intent to break the law.

What is recorded on the officer's body-worn camera?

The body-worn video cameras record sound and images. The footage recorded is that of the interaction between the officer and the member of the public they are speaking to, and not of any alleged offence. Any offence is witnessed by an authorised officer prior to an suspected offender being approached.  The interaction is recorded to safeguard both parties and the conversation can be reviewed, if required, at a later date. More information can be found here.

If you do not agree that you committed the offence, you have the option to plead not guilty. The law provides that this is by way of prosecution and trial in the magistrates’ court (or in some cases before a jury in the Crown Court).

A summons or written charge would be sent to you in the event of non-payment of the fixed penalty and any defence or mitigation may be presented to the court in the normal way. It will then be up to the court to determine whether or not an offence was committed and therefore whether or not any penalty should be imposed and what that should be. There is no appeal mechanism against the service of a fixed penalty notice. The issuing of the notice by the officer simply suspends the starting of a prosecution.

Any mitigating circumstances that you wish to make us aware of can be communicated to us. This must be in writing for legal reasons. The address to use is on the reverse of the fixed penalty notice.

The fixed penalty system saves time for everyone involved (including the offender) as opposed to taking the case to court.

It should be noted that the financial penalty imposed by the courts could be significantly greater than that which is set for a fixed penalty notice. The prosecution will ask for an order for you to pay its costs and you will be liable to pay the court’s surcharge.

There is of course no obligation on the Council to provide “warning” signage regarding littering or other criminal offences that apply throughout the country, or to announce the presence of enforcement officers or police.

There are signs however relating to controls under public spaces protection orders where these apply. The Council also has posters about litter on many bins and signs about dog fouling on many lampposts.

In addition to our local publicity, national campaigns have also been run.  Keep Britain Tidy has a long history of promoting the abatement of litter through publicity and high-visibility advertising. Other organisations and landowners use signage to ask people not to leave litter.

The packaging to many items, such as confectionary and soft drinks, have either images or text asking people to use a litter bin or recycle when they have finished with the contents. The Tidyman icon has been found on product packaging since the 1950s.

Litter legislation has been in force for many years and is enforced. Laws dating back several hundred years have made littering a criminal offence. 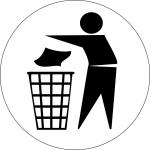 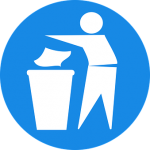 Why should I pay a fixed penalty notice when there were no litter bins nearby?

As with signage it is not feasible for the Council to place litter bins in every street, road or highway, though every effort is made to place bins where they are most needed and where the greatest level of pedestrian footfall.

Where bins are not available then it is up to everyone to act responsibly and make arrangements to either take their litter home or carry it until a litter bin is available.

What is classed as "litter"?

The term "litter" covers a wide range of items, which can include such things as cigarette butts, food waste, drink cans, sweet wrappers, packaging or a bag of waste discarded on the street.

Littering can take place on any land (public or private) in the open air.

The law was amended in 2005 to specifically include "the discarded ends of cigarettes, cigars and like products, and discarded chewing-gum and the discarded remains of other products designed for chewing.”

I could not place my cigarette stub in the litter bin as it could have caught on fire but I was still issued with a fixed penalty notice. Is this fair?

Smokers are responsible for ensuring that they completely extinguish their cigarettes before placing them in a bin. Cigarette waste is the same as any other waste in terms of litter laws and you can be issued with a fixed penalty notice for not disposing of cigarette ends properly. Obviously care should be taken to avoid any risk of fire and in particular cigarette ends should be completely extinguished in the ashtray or on the stubbing plates provided on many litter bins.

There is also no reason why smokers (who are well aware that smoking will result in waste) cannot carry portable "butt bins" with them or create their own by placing soil or sand in a small tin.

But I put my cigarette stub in a drain

Cigarette butts don’t disappear by disposing of them in a drain; you are still littering and causing additional problems. Cigarettes can block drains and cause pollution to waterways and the sea. Cigarette litter can also pose a hazard to animals and marine life when they mistake filters for food. The law applies to drains.

If I pick up the litter after an officer has approached me, do I still receive a fixed penalty notice?

Littering relates to the dropping, throwing or depositing of litter and the leaving of it. Whether or not you later volunteer to pick up that litter, you have still committed an offence if you originally walked away.

What is the offence of dog fouling?

It is an offence not to clean up after your dog as soon as it has happened, on any land which is open to the air and to which the public are permitted to have access.

It is not a defence to say:

But I wasn’t given any warning about the offence

Litter legislation and controls on dogs have been in force for many years.  Laws on litter date back at least 300 years.  Over the past two decades significant amounts of money have been spent both nationally and locally on educational and awareness raising campaigns. Such publicity has included posters, advertising and articles in the press, and adverts on the radio, TV and on transport systems. On top of this organisations like Keep Britain Tidy run national campaigns.

Therefore we take our enforcement duties seriously and back up what is an important message with action. This is the aim of our enforcement patrols which seek to target those who choose to ignore the laws which the vast majority abide by.

Environmental quality issues and offences such as littering and dog fouling have consistently been highlighted by residents as of significant concern.

Can I pay my fixed penalty by instalments?

What if I have difficulty paying the fixed penalty?

If you have difficulty paying the fine you should contact the address on the notice in writing and provide supporting evidence. Alternatively speak to an advice service.

What happens to the money you get from fixed penalties?

Fines are paid to the HM Courts & Tribunals Service and not to the Council.

Are the enforcement officers paid commission for issuing FPNs?

Fixed penalty notices are issued by officers directly employed by the Council or by police officers and police community support officers.

Fines are paid to the HM Courts & Tribunals Service and not to the Council.

If you receive a fixed penalty notice, you have the option to either:

- pay the fixed penalty, or

- have your case heard in a court

You cannot appeal against the notice.

A fine is a penalty issued by a court following a conviction.