Dog owners are encouraged to train their dogs to foul in their own garden or yard. Should the dog foul in a public place, the deposit must be cleaned up immediately, using a plastic, or other suitable, bag. The bag should be tied up and disposed of in any litter bin, or taken home to your wheeled bin. 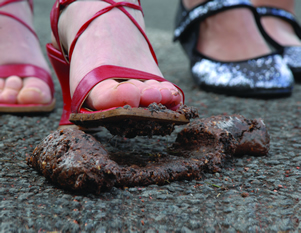 Under the city-wide public spaces protection order (made under the Anti-social Behaviour, Crime and Policing Act 2014),  a person who is in charge of a dog that defecates on land to which the public has access, and who fails to immediately remove the faeces, is guilty of a criminal offence.

The law says you are responsible for clearing up after your dog, even if you were not with it or did not see it foul.

Dog fouling is not only deeply unpleasant, it can be dangerous. Contact with contaminated soil can in some cases cause Toxocariasis in humans. This is an infection by a worm and it can lead to dizziness, nausea, asthma, and even blindness and seizures.

The maximum fine for someone who doesn't clean up after their dog is £1,000. The current fixed penalty is £100.

Normally persons who fail to clean up after their will be issued a fixed penalty notice. Repeat offenders and those who are uncooperative will be referred to the magistrates' court without the option of an out-of-court penalty.

Always carry a poop scoop, which is a specially designed plastic shovel, or a bag to pick up and carry the mess to a litter or waste bin. You can buy dog foul bag dispensers that attach to your dogs' lead so that you do not forget them. If a litter bin is full you would be expected to either take the dog's waste home or use the next available litter bin. Leaving the bagged waste on the ground or in a hedge would be a criminal offence.

We aim to respond to reports of dog fouling on public land within 10 working days.

The Anti-social Behaviour, Crime and Policing Act 2014 defines a “public place” as any place to which the public or any section of the public has access, on payment or otherwise, as of right or by virtue of express or implied permission. Private gardens, yards, drives, etc. are not and cannot be designated land as they are not accessible by the public as of right.

The current order recreated the dog fouling order made under the Clean Neighbourhoods & Environment Act 2005 (and before it the Dogs (Fouling of Land) Act 1996). Both those orders also made it an offence for a person in charge of a dog to fail to clear up after the dog has fouled land, which is open to the air and to which the public are entitled or permitted to have access (with or without payment).

If a dog enters your garden and fouls, this would be a civil matter and the Council may not become involved. However, if the dog is unaccompanied and can be detained, the Council can collect it as a stray.

If dog fouling is accumulating at the address where the dog lives, such that it is causing a nuisance, please see our pages on how we may be able to help.

END_OF_DOCUMENT_TOKEN_TO_BE_REPLACED

If you know the details of a person who lets their dog foul the street, you can report this. We would need at least the address of the offender.

You can request dog fouling enforcement signs for your area. However please note that we cannot guarantee an outcome from this. (The signs would only be attached to lamp posts or litter bins).