Newcastle City Council and Your Homes Newcastle were recognised for their work to end male violence against women and girls on when they were awarded White Ribbon Accreditation on 25 November 2021, White Ribbon Day.

As he presented the award, Peter Lassey, Chair of White Ribbon UK, told the Councillor Habib Rahman how proud he was of all the work we are doing to tackle gender based violence and that ours was 'one of the most impressive applications we've ever had.'

Below are some photos from the presentation ceremony and a video from Councillor Nick Forbes expressing his delight on our accreditation. 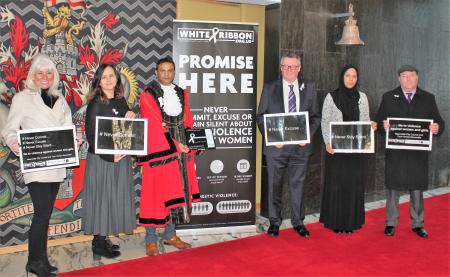 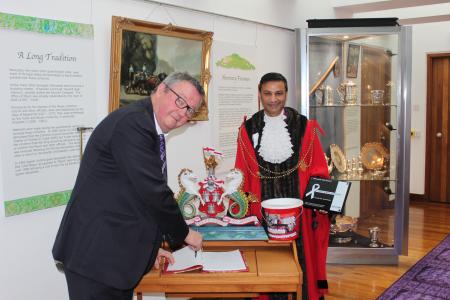 On 15 November, Newcastle City Council hosted White Ribbon UK’s first national event since the start of the pandemic.  The hybrid summit, which attracted around 100 delegates from across the country, considered what can be done to make our towns and cities safer at night.

Topics discussed included initiatives to prevent harassment, abuse and violence on public transport, how licensing could be used to promote a positive culture, how pubs clubs and other venues can prevent abusive behaviour before it starts and whether better planning and management of the physical environment could help create safer spaces for everyone.

Delegates also discussed practical actions that could be introduced to address safety and promote positive behaviour change in men so that women don’t need to feel frightened when they’re out at night.

White Ribbon UK will be producing a report and recommendations from the event which will be presented to an All Party Parliamentary Group for further action.

White Ribbon Day is held on 25 November each year which is the same day as the United Nations' International Day for the Eradication of Violence against Women. This is followed by 16 Days of Activism against gender-based violence.  On White Ribbon Day and for the two weeks after everyone, but particularly men and boys, are encouraged to wear white ribbons to show their support for White Ribbon and the 16 Days Campaign which runs until 10 December each year.

We use social media campaign during the 16 Days Campaign to raise awareness and encourage people to take action to stop violence against women and girls.

On 25 November 2020, the Leader of the Council, Councillor Nick Forbes was joined by the Leader of the Opposition, Councillor Nick Cott and Cabinet Member for Climate Change and Public Safety to raise the White Ribbon Flag.  The socially distanced event took place outside the Civic Centre and marked both White Ribbon Day and the start of our 16 Days of Activism against gender based violence campaign.

Peter Lassey, Chair of White Ribbon UK, said Newcastle's accreditation application was one of the most impressive their organisation has ever had.