Civic and business leaders from across the North are putting forward a collective partnership offer to Government, setting out how the North can lead the Fourth Industrial Revolution and deliver on the levelling up promise. 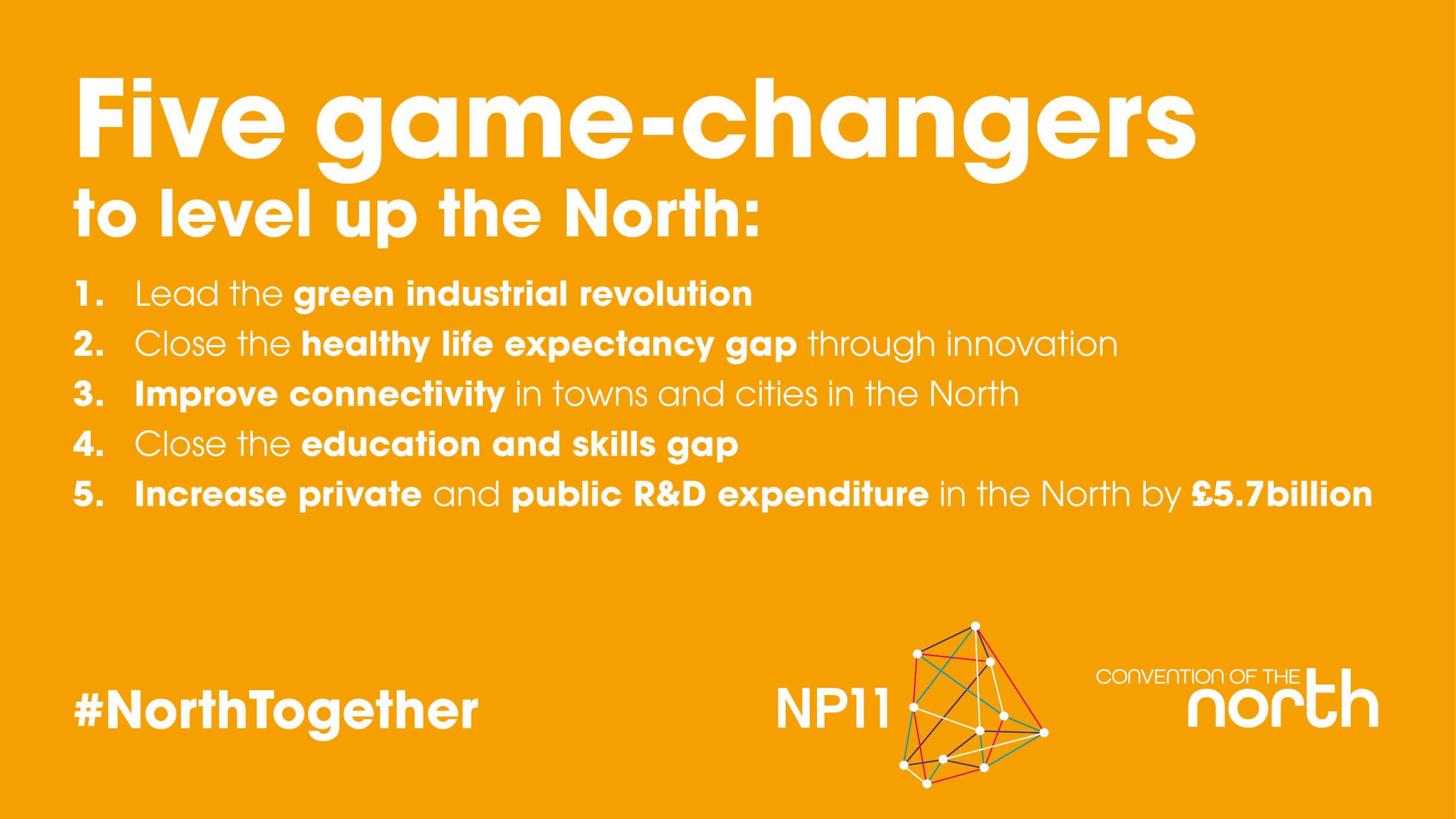 In a document published today by the Convention of the North and the NP11 group of northern local enterprise partnerships (LEPs), northern leaders set out the five “gamechangers” which, through collaboration across the North and with Government, will grow an inclusive economy that delivers for the North and the country, while also tackling the health inequalities that have been laid bare by COVID-19. Those game changers are:

The five gamechangers represent a combined Northern offer to Government to ensure the North plays its full part in levelling up the UK, leading the transition to a Net Zero economy and developing a competitive Global Britain.

Leaders have invited the Secretary of State for Levelling-Up, Housing and Communities, Michael Gove, to join them for a working Convention in Liverpool in January 2022, focused on turning the Government’s positive commitment to level up the North into action.

Liverpool City Region Mayor, Steve Rotheram, who will mark the document’s launch with a business roundtable in Liverpool focusing on the opportunities for the North to lead the transition to Net Zero, said:

“True levelling up has to mean tackling long-standing and structural inequalities that exist between North and South in this country on a wide range of issues, from healthcare and job prospects, to transport and infrastructure spending. This is not an issue of party politics but one of fairness and social justice.

“From levelling up to climate change and everything in between, the solutions to many of the fundamental issues facing the country lie in empowering local leaders to work with central government and take the decisions that our areas need to shape our own destinies and build a stronger, fairer, better balanced United Kingdom.”

Cllr Nick Forbes, Leader of Newcastle City Council and Chair of the Convention of the North, said:

“The North of England is ready and prepared to play a leading role in driving this country forwards but we need meaningful partnerships with Government if we are to succeed.

“We are asking the Government to work with us and equip the North so it can achieve its full potential. Delivering this would truly demonstrate a commitment to levelling up the North.

“We want to develop skills within our communities, tackle the health inequalities that have been laid bare by the pandemic, attract greater investment into our towns and cities, and lead on the Net Zero transition. We cannot achieve these goals on our own, and that is why the North is united behind these priorities and this offer to Government today.”

“The North has phenomenal assets in areas such as energy, advanced manufacturing, health innovation and digital that can power the UK’s post-COVID recovery and create jobs and opportunity for our people. As a combined region, we also have the scale to help the Government deliver on its ambition for a competitive and confident Global Britain.

“Successful partnership working between the public and private sectors is going to be crucial to delivering the gamechangers we have collectively identified. Businesses drive innovation and create quality jobs, both of which contribute to people’s health, wealth and quality of life. This is why the NP11 is adding its business voice to that of northern civic leaders in making this offer today.”

“Today is a powerful statement of northerners’ desire to get on with the job of levelling up, working together across the North and with Government. Through a clear focus on our levelling up priorities of health, skills, transport, innovation and leading the transition to net zero, we can deliver an inclusive, productive, sustainable economy that works for all northerners and for the country.

“As an immediate action, we’re calling on Government once again to publish its Integrated Rail Plan and commit to delivering both Northern Powerhouse Rail and HS2 in full. We will not be able to achieve levelling up without an affordable, effective and reliable transport system that connects people to jobs, education and essential services.”

“All too often, health inequalities go hand in hand with the wider impacts of poverty. That’s seen in so many different aspects, from missed life chances for young people to the greater risk of being a victim of crime for people living in areas of deprivation.

“The way to solve this, to spread opportunity and to reduce crime, is to level up health services and investment in the North.”

Today’s publication of Northern leaders’ collective offer to Government will pave the way for a Convention of the North with NP11 event, due to take place in Liverpool in early 2022.

Following the success of its inaugural event in September 2019, at which Prime Minister Boris Johnson made a series of commitments to the North, the Convention of the North with NP11 will work with Government to focus resources and investment on the North to allow it to level up.