On this page you will find details of some of the past Holocaust Memorial Day events and activities that have been held in Newcastle.

"We will continue to do our bit for as long as we can, secure in the knowledge that others will continue to light a candle long after us." - Gena Turgel, survivor of the Holocaust (1923-2018)

The theme for Holocaust Memorial Day in 2021 was ‘Be the light in the darkness’ which encouraged people to reflect on the depths humanity can sink to and celebrate those who resist the darkness and who are the light before, during and after genocide .

In Newcastle the council lit the Civic Centre purple as a symbol of 'light in the darkness' - a beacon of hope for all - and worked with local communities and faith-based organisations to develop an online programme of activities and events that  encouraged residents to be shining lights of hope during dark and difficult times now and in the future.

The Representative Council of North East Jewry (Rep Council)  unique and thought-provoking film for 'Be the Light in the Darkness' was first published on Sunday 24 January 2021 to coincide with the lighting-up of the Civic Centre.

You can find out more at https://www.northeastjewish.org.uk/

Monkfish Productions short film, 'Let This City Shine' made by Monkfish Associate Artists Andy Berriman and Sky Hawkins, celebrates Newcastle as a place of hope and light and features moments of people in Newcastle acting as shining lights for others who were or are struggling, lonely or afraid.

The broadcasts are available at https://www.mixcloud.com/Skimstoneradio/

Brundibar Arts Festival is the only annual Festival in the UK dedicated to celebrating music and arts created by victims of the Holocaust.  Their film 'The Cook Sisters: Heroines of the Holocaust' tells the story of two ordinary sisters from Sunderland who worked to bring Jews out of Nazi Europe saving the lives of 29 people.

Time Bandits is a new development in historical interpretation and living history drama, from first person recounting to skirmishes and battle re-enactments.

Time Bandits' Holocaust Memorial Day film 'The Relief of Belsen' is taken from an eyewitness account by Captain Andrew Pares of 113 LAA Regt, (formerly 7 DLI). The words used are his and based on other contemporary testimony.

A Living Tradition is an organisation based in the North East of England which uses the heritage of human rights and community cohesion work in the region to encourage and promote it now and in the future.  The commemorated Holocaust Memorial Day 2021 through the mediums of film and poetry.

'Who Is Bonhoeffer for Us Today' examines the legacy of a brave and principled man who stood up to the Nazis and helped Jews in the 1930's and 40's and what it means to us today.

'Remembering the Rohingyas' is a short film uses photos and contributions to increase understanding of the genocide of Rohyinyas in 2017 and shows how human goodness can be a light even in the bleakest darkness.

'Newcastle: A Place of Sanctuary' by Yani Siskartika and Peter Sagar looks at the way Newcastle and the wider northeast has been a centre of human rights work for 250 years and how we have welcomed people from different communities over the years.  It also provides a fascinating tour of our own  history and a reminder of the terrible suffering the Roma went through during the Holocaust and how they are still a very marginalised today.

'Genocide in Bosnia: A Warning from History' features an interview with Smajo Beso from the Northeast Bosnian community, in which he talks about his early life in Bosnia, including how he had to flee during the war in 1990s, and his journey since then.

'Examining the Roma Holocaust Through Poetry',  made by North East based poet Jo Clement and featuring Nicu Ion, examines some of the poignant and deeply felt poems written by Roma in response to the terrible events of the 1930’ and 1940’s.

'A People Uncounted' effortlessly weaves stories from the Porajmos (devouring) - the Roma word for the Holocaust - with those of Roma people facing discrimination. Due to the nature of the subject matter, the film is suitable for over 16s only so anyone wishing to watch if should email information@newcastle.gov.uk to request the log-in details.

"Don't be content in your life just to do no wrong, be prepared every day to try and do some good." - Sir Nicholas Winton, who rescued 669 children from Nazi occupied Europe.

Holocaust Memorial Day in 2020 marked 75 years since the liberation of Auschwitz-Birkenau. It was also marked the 25th anniversary of the genocide in Bosnia.  The theme for HMD 2020 was 'Stand Together'.

Throughout history genocidal regimes have deliberately fractured societies by marginalising certain groups. Now more than ever, we need to Stand Together with others in our communities in order to stop division and the spread of hatred in our society. Around the country hundreds of groups created Memorial Flame artwork and 75 of these were selected for a national exhibition to mark 75 years since the end of the Holocaust.  The exhibition was launched at the UK's Holocaust Memorial Day Commemorative Ceremony in 2020.  A digital version of the exhibition can be found here. Artwork from two Newcastle based groups, Projects4Change and Monkfish Productions, were included in the 75 Memorial Flames exhibition that was held in London.

Newcastle Holocaust Memorial Day programme included a mix of creative activities based on the Stand Together theme including films, poetry, music and exhibitions.  The programme began on 23 January with Celebrating Our Traditions: Stand Together Music Event at the Tyneside Irish Centre and finished when the Jewish Life on Tyneside exhibition about the contribution the Jewish community has made to our city closed when lockdown was announced.

Children and young people at Projects4Change at the Cowgate Centre learned about the Holocaust as part of a Flame for Memorial project based on people's experiences of the Holocaust. The group's starting point for the project was a visit from Marta Josephs who talked about her father's moving story of survival and the importance of remembering and learning from the Holocaust.

The group worked alongside artist Nicola Lynch to create their Memorial Flame artwork which included elements of Marta's father's story.  Their artwork, which they named Holding On, was then presented Marta as a gift to honour and commemorate her father.

Monkfish Projections - A Little Bit of Good in the World

This Memorial Flame artwork was inspired by Archbishop Desmond Tutu's quote "Do your little bit of good where you are; it's those little bits of good put together that overwhelm the world."

Members of the Good Space work place community worked with Monkfish Productions and the Volunteer Centre Newcastle to create this artwork which captures the idea that by Standing Together and reaching out with compassion and kindness to others we can work together to change the world. 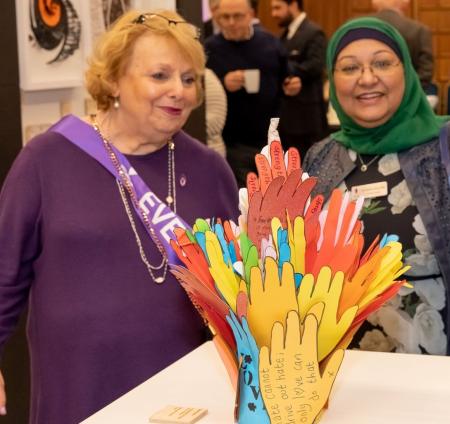 You can find information on all the Holocaust Memorial Day programme of events and activities here.

The UK national Holocaust Memorial Ceremony was moved online for the first time ever in 2021 due to COVID-19.  You can watch the highlights of the ceremony below or watch the full event at https://www.hmd.org.uk/resource/ceremony/

In 2020 the Holocaust Memorial Trust worked with groups from around the UK to create the 75 Memorial Flames exhibition to commemorate 75 years since the end of the Holocaust. Due to the COVID pandemic a digital version of the exhibition was also created providing a lasting tribute that future generations will be able to view.