Families are advised that there will be new start dates for some secondary school and college students going back to school after the Christmas holidays. 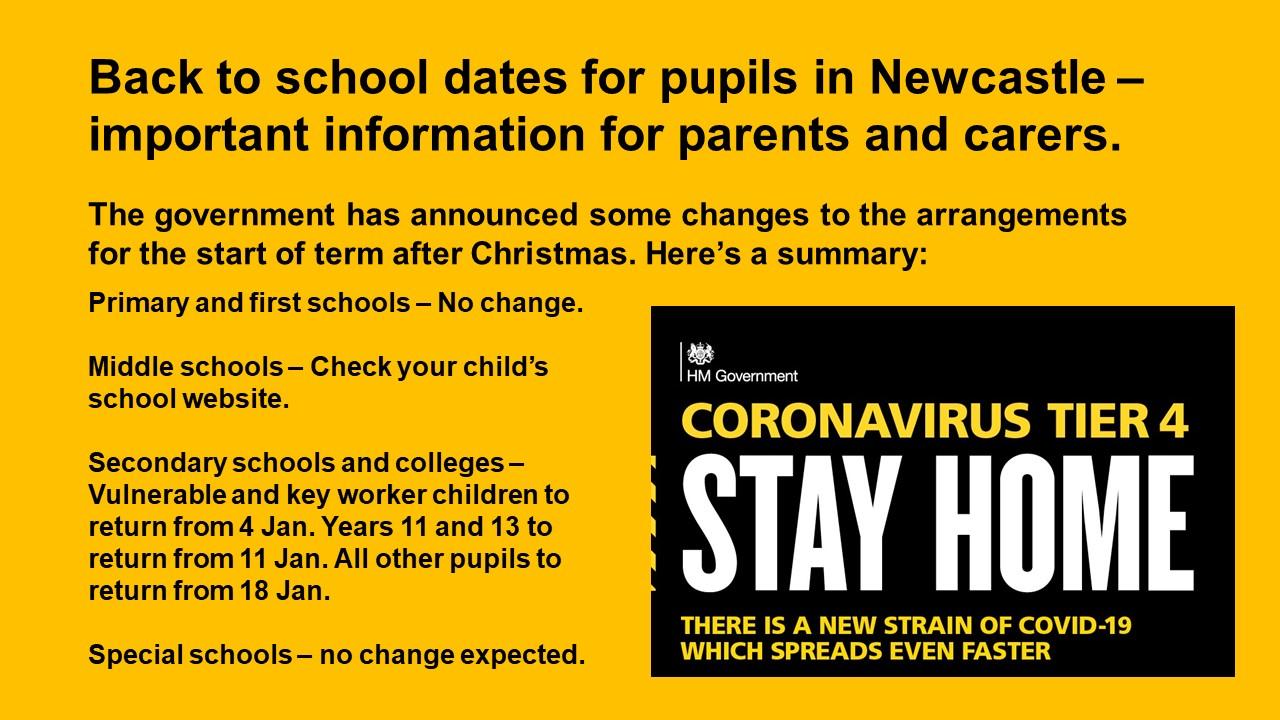 The government confirmed the arrangements yesterday (December 30) as part of the wider announcement that the North East region, along with many others in the country, would be placed under Tier 4 ‘stay at home’ restrictions.
For many Newcastle primary age school children, there will be no change to the planned date for the start of the new term in January.
But most pupils in secondary and high schools will have a delayed return.
The city’s middle schools have both primary and secondary aged pupils.  These schools will communicate directly with parents and carers about any changes to the start of term arrangements.
Covid testing is also due to be introduced in schools – starting with secondary schools – from next term. Arrangements for how this will work in Newcastle schools are due to be confirmed next week, and parents will be updated.

Cllr Paula Holland, cabinet member for education and skills at Newcastle City Council, said: “Following the government announcement yesterday regarding the start of the school term in January, there are now new arrangements for different parts of the country and for different year groups.
“Understandably this has meant that many parents and carers may be feeling a little uncertain about when their children are due to return to school after the Christmas break.
“We are setting out the arrangements that are in place in Newcastle, starting from next week, so that families have clarity and reassurance over when children are expected to return to school.
“As soon as we can update parents and carers about testing arrangements in schools we will do so.
“Staff in all of our schools will continue to work hard, under challenging circumstances, to ensure the safety and wellbeing of pupils and I would like to thank them for their ongoing efforts, which are greatly appreciated.”

The back to school arrangements for schools in Newcastle are as follows:

Primary and first schools
There will be no changes to the arrangements for children at these schools.
All children will return as planned from next week. In most cases the first day back will be Monday 4 January but, for schools with planned teacher training days, the first day back for pupils will be Tuesday 5 January. Parents and carers should check their child’s school website if they are in doubt.
Pre-school and early years settings, including nurseries and childcare providers, can also open as planned from next week.

Secondary and high schools
There are different return dates for different groups of children in secondary and high schools.
From Monday 4 January only pupils who are vulnerable or who are children of key workers will return to the classroom, with appropriate bubbles in place.
All other pupils will study from home, with priority for remote learning given to exam students in Years 11 and 13. Free school meals will continue to be provided to those who are eligible.
From Monday 11 January students in Years 11 and 13 will return to school with those year group bubbles re-established. Pupils in other year groups will remain at home with remote learning provided and free school meals for those eligible.
From Monday 18 January all other children in Years 7, 8, 9, 10 and 12 will return to school with year group bubbles re-established.
Children who are due to sit written exams at the beginning of term who may be affected by the changes to start dates will be contacted by their school.

Middle schools
Parents and carers are advised to check their child’s school website for any changes to arrangements published before the Christmas break.

Special schools and alternative provision schools
These schools are expected to open as planned from next week with no changes to start dates. There is some flexibility for return to school arrangements for secondary special schools.

Parents and carers should contact their child’s school or college if their need any further information or advice. Further updates will be given as soon as information becomes available.